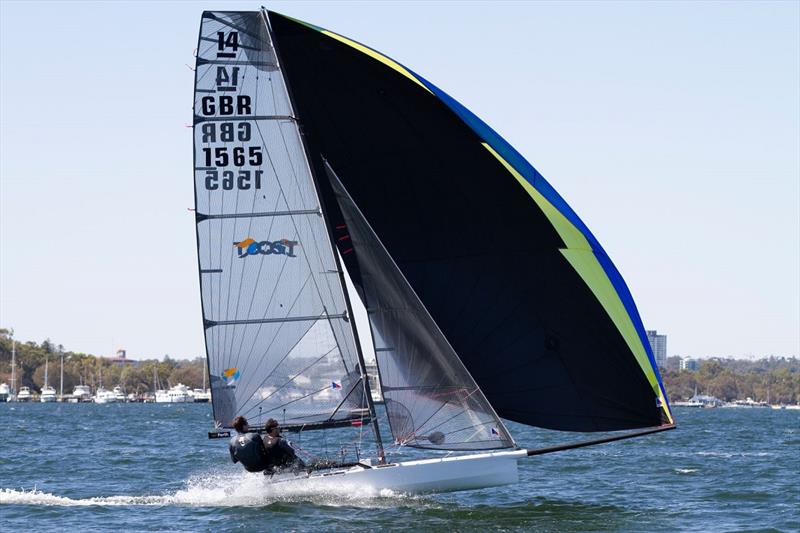 It's a wrap. The CST Composites i14 2020 Perth World Championships at the Perth Dinghy Sailing Club came to an end on Friday with the Brits taking the three podium finishes in what some would say difficult conditions in Perth.

There was no stopping Archie Massey and Harvey Hillary on Zog who secured the World Championship with a day to spare after 3 wins and 2 seconds in the first 5 heats. This was the 5th World Championship title for Archie but the first for his crew, Harvey. Second overall was fellow Brits Daniel Holman and Alex Knight on Helly the Pelly who showed great courage in the regatta after breaking their mast on the Invitation Race and then pulling an all-night repair job to ensure they were ready for the main event. Third was another British crew Neale Jones and Edward Fitzgerald on Scrumpet.

Perth turned on the weather showing competitors a range of conditions, testing and trying competitors in typical Perth South-West breezes, to challenging easterly winds on the Swan River. Racing was abandoned on the Day 1 of the championships due to a strong south-westerly averaging 26 knots. Back to back races were held on Day 2 in a building sea-breeze showing all just how fast these boats can go. The race committee made the wise decision to bring racing forward on Day 6 of the regatta to an early morning start amid the forecast of another strong South-West breeze. This proved to be a great decision with the afternoon conditions building to a very strong southerly "Perth" sea breeze. The remaining race days saw competitors battle it out in Easterly's and Southerly breezes ranging from 8-22 knots. Despite some race days seeing tricky conditions on the Swan River, experienced race officers Kevin and Ross Wilson succeeded in setting a fair course each race day.

The regatta saw several broken boats with spinnaker pole blow outs and broken masts but also a fair share of crew injuries demonstrating just how tough the i14's can be in a good Perth breeze and how resilient these sailors are.

There was a strong and competitive fleet of 67 entries from around Australia, United States of America, United Kingdom, Canada, Italy and Japan.

Proving that i14's are not just a men's game, there were 8 female entries and Lauren Laventure from Canada on Pandamonium took home the Glass Doll Trophy for the highest placing female, finishing a respectable 22nd overall.

Within the fleet were 41 Australian competitors who were also competing for the Australian National title. In an astonishing result that could not be predicted, was a 3-way tie for the title with Del Boca Vista (Brad Devine and Ian "Footy" Furlong), Wang Wang (David Hayter and Trent Neighbour) and Ronstan/Irwin Sails (Lindsay Irwin and Andrew Perry) all on equal points at regatta end. Hayter and Neighbour took out the Australian National Championship on a countback in front of Irwin/Perry and Perth locals Devine/Furlong. This was despite Devine and Furlong finishing 4th overall in the Worlds in front of their Australian classmates. Brad Devine also took out the Windmaster trophy for the highest placing competitor in the World Championships over the age of 50 years.

Perth Dinghy Sailing Club did an amazing job hosting the regatta and received commendations from all international competitors. The club has a deep history in i14 skiff racing and is one of the few clubs that is completely volunteer run.

As is traditional for the i14's, the social events were also something to remember. The event kicked off with the teams racing right in front of the club providing spectacular views from the club balcony. The New Years Eve party, the Welcome Night complete with a didgeridoo performance and Aboriginal-led dancing and the i14 "Legends" night followed. The club house was busting at the seams with i14 sailors, their families and children and club members enjoying the comradery and international friendships that the i14 class is known for. The regatta wrapped up with a formal presentation evening at the stunning University of WA Club.

The next i14 Worlds will be hosted in Flensburg, Germany in August 2021.