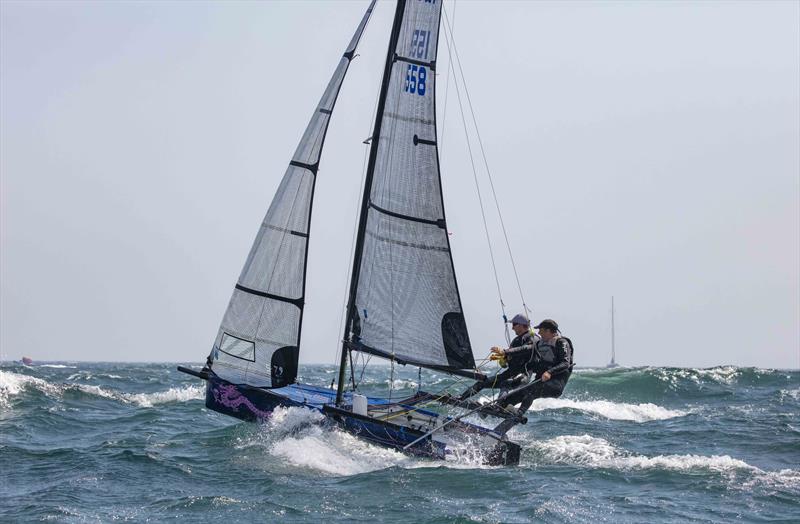 This year's I14 National Championship saw a long-awaited fleet return to Tynemouth Sailing Club, the spiritual home of the northern fleet. The Regatta saw a much-anticipated head to head of the current and ex-World Champions, and the pre-event form guide also predicted a strong performance for Dan Holman and Alex Knight. 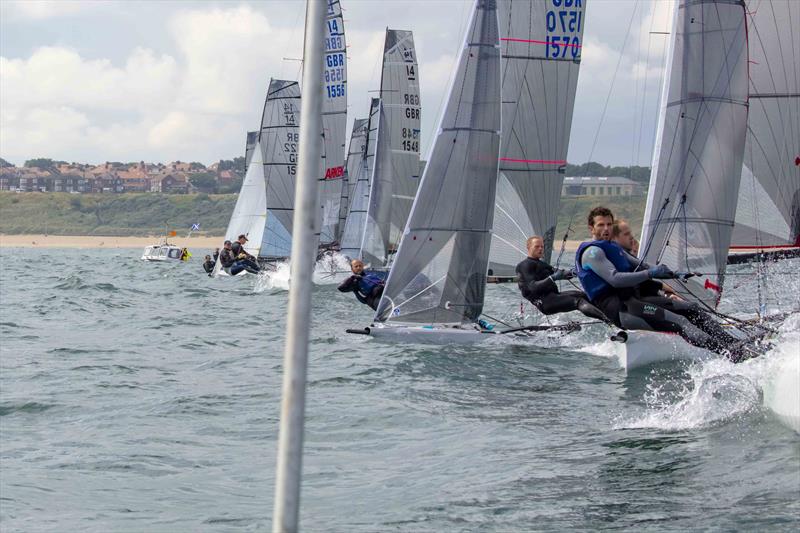 Big seas would be the theme for the week, providing testing conditions for the foil-born twin wire class. Race 1 started in single stinging conditions in the Southern race area. Glenn Truswell and Ed FitzGerald made an impressive start showing the fleet a clean set of heels with Andy FitzGerald and Richard Dobson in second and Douglas Patterson and Mark Tait in third. Truswell and Fitz's pace and superior wave techniques were again evident in race two, with Holman and Knight in second and current World Champions, Archie Massey and Harvey Hillary in third. 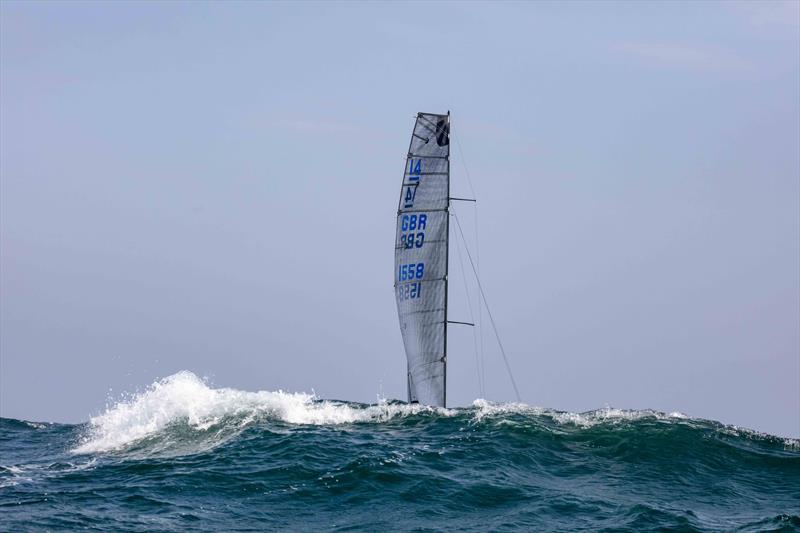 Day two saw similar conditions with a two-meter swell and just enough breeze to pull two strings. Holman-Knight and Patterson-Tait again laid down the challenge to the impressive team of Truswell and FitzGerald in race 3, with Massey and Hillary taking the fight in Race 4.

Other great battles were developing in the fleet, with a fleet of Ovington Beiker 6 closely matched and offering one-design level racing. I14 legends Martin Jones and Andy FitzGerald were closely matched and challenging for a podium. Hometown boy Martin Jones, crewed by Ian Lodder, was thriving in the conditions. Two other Beiker 6 teams of Andy Shaw & Rob Struckett and George and Jack Yeoman were also locked in a tight battle. The stage was set for Thursday's Prince of Wales Cup race. 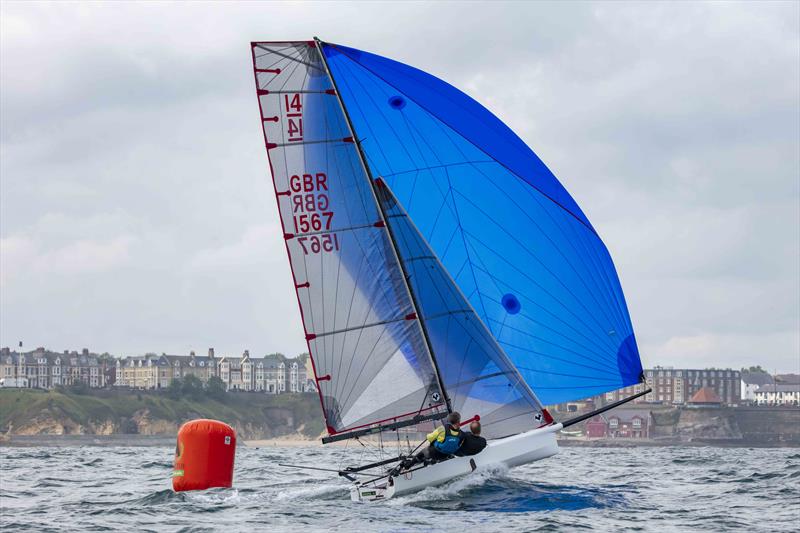 Wednesday, the excited fleet fought out the Wind Whisperer Trophy for the overall week winner. Glenn Truswell and Ed FitzGerald continued to dominate with another perfect scoreline in Races 5 and 6. Massey and Hillary took second in Race 5, with Shaw and Struckett second in Race 6. Patterson and Tait took third and fourth, putting them level on point with Massey and Hillary for second overall.

After three days of racing at Prince of Wales Week, the fleet had banked plenty of sailing in glorious conditions with unseasonal South-easterlies blowing off the southern North Sea, albeit with a bit much bent leg marginal trapezing for most. Glen Truswell and Ed Fitzgerald had been making it look pretty easy with straight bullets, but the forecast for the Prince of Wales Cup one race national championship looked decidedly more robust.

Consequently, the class prudently moved the start time forward by 2h to 1100hrs. This move was widely popular given that due to Covid restrictions and weather, not many teams had sailed in more than 12kts in the past 18 months.

Come the day itself, everything seemed a lot more benign as the fleet sailed out and warmed up in 10 - 12kts from the same south-east direction as the previous days. After the start gun and what felt like a colossal first beat, the leaders came out of the left hand side, with Glen Truswell / Ed Fitzgerald reprising their role at the head of the fleet, closely pursued by multiple world champion Archie Massey and Harvey Hillary, and the Yeoman Brothers, starting to look more consistent in their Bieker 6 built just up the road from the sailing club at Ovington Boats, and class legends Andy Fitzgerald crewed by Richard Dobson, and Martin Jones crewed by Ian "Milky" Lodder.

After the first very long lap, the wind had built to a more interesting 15 kts, and with what felt like a several hundred miles fetch, the sea had started to heap up pretty quickly, meaning that some prudence was needed upwind, and some crews were regretting the "look out the window" approach to rig tuning pre race.

After the second very long lap, PRO (and former i14 sailor) Howard Steavenson wisely elected to shorten the windward leg- this being the only option available as the POW deed precludes shortening the number of laps. This confused several, with Massey / Hillary using the opportunity to snatch the lead after an overstand by Truswell and Fitzgerald. 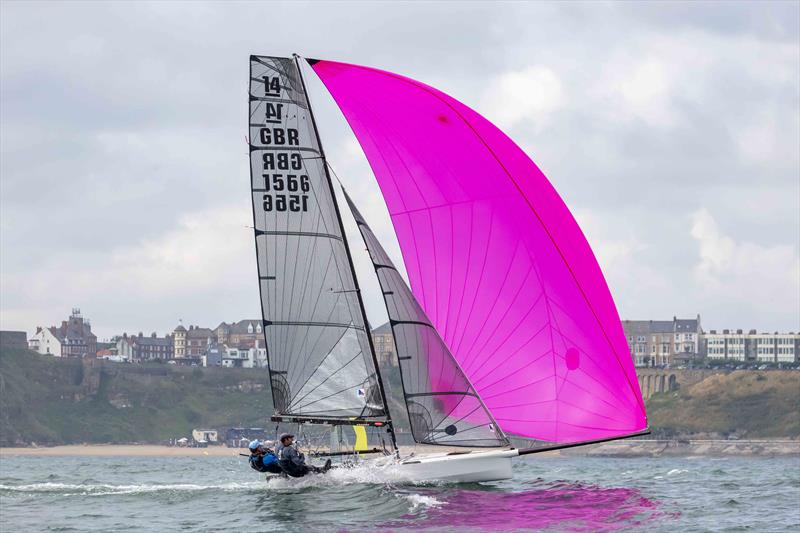 Come the third lap the wind and sea had built more to the full fat forecast 20kts and big seas, making matters slightly more attritional. This was not an issue for Truswell / Fitzgerald, but an audacious double gybe into the leeward mark went wrong for Massey and Hillary ending their challenge, with a similar fate befalling Pattison and Tait at the next leeward. The top reach had been a two-sail affair from the second lap, but as the race wore on it became a challenge to sail to 135 deg true with just main and jib, necessitating some hairy steering through the danger zone to get up to the wing mark, followed by a two-sail gybe which seemed to be carried out with panache by most no doubt helped by waves now approaching 6ft. The second reaches were more challenging as the waves were lined up with the breeze so plenty of opportunities to go down the mine. As the race entered the endgame, Truswell and Fitzgerald made no mistakes and cruised to victory, with Holman / Knight chipping away over the last couple of laps to get into second and consolidate. Behind them, a hard charging Massey / Hillary led the rest of a surprisingly tightly packed peloton including Fitzgerald / Dobson; Andy Shaw / Rob Struckett; and the Yeoman Brothers.

Part of the romance of a one race championship such as the POW or the Burton Cup is that it can give the outsiders a bit of a chance for a punt on the day, rather than all the mundane conservatism associated with classical regatta sailing. That said, most plucky outsiders tend to be run to ground by the top guys or run out of talent at some point over the course of 2.5 hours of international 14 sailing. This year's POW had no hiding place for chancers and ran broadly to the formbook with a masterful display by Truswell and Fitzgerald, both reprising the POW trophy having won previously with different sailing partners, although, perversely in the same boat, GBR 1553 "Scrumpet." 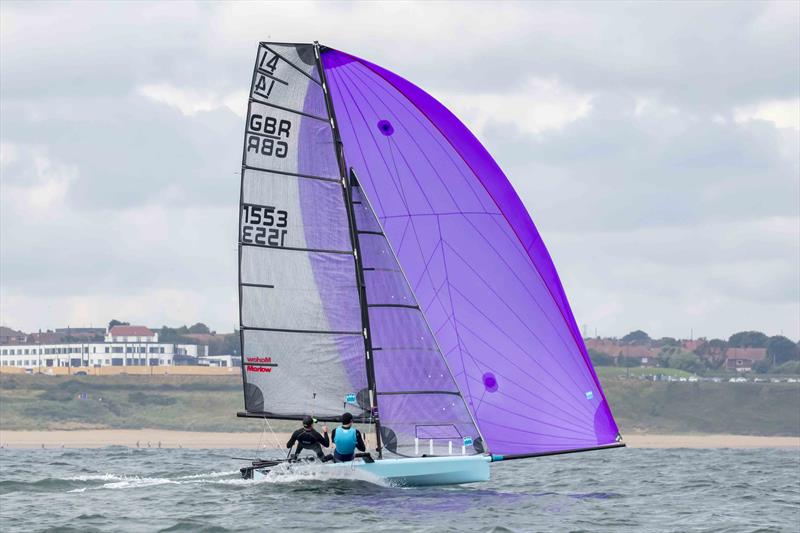 Honourable mention to the Yeoman Brothers who were putting in an assured performance in second for several laps in big breeze until a spinnaker tack line issue hampered their downwinds. Similarly, Andy Fitzgerald who, despite being of a (nearly?!) pensionable age had kept his elegantly coiffed and not at all thinning barnet dry and was looking good for a 3rd place in the big conditions until the kite halyard parted on the last leg to the finish, letting some less deserving whippersnappers past. Keeping somewhat more youthful barnets dry also were Jock Calvert and Emily Covell - new entrants to the class in a venerable Bieker 4 and a potentially incendiary mixture of ex Finn sailor steering a trapeze boat. Luckily Emily is a 49erfx alumni and therefore will have carried him all day. These two got around in fine style in 9th after a bad first beat, but more importantly very much still a couple after a race that would have challenged many a relationship! Finally Julian Pearson and Cameron Barr, who, after Covid related mutual isolations, had driven up from the South Coast just for the POW race and slept in their car the previous night - not textbook prep but excellent dedication.

Overall, an epic race in epic conditions that nobody is likely to forget in a hurry, proper POW race.

Prince of Wales Cup Race Results:
If you finished in the top ten at the International 14 nationals then enter your Gear Guide information here

Next year POW will be in Fowey the first week of June (1-5th June 2022) - please come and check it out. There are many entry points into the class to suit all pockets.

Tynemouth SC delivered more champagne conditioning for the final day of racing. The 8-10 knots with a two-meter swell provided smiles for all competitors with battles developing throughout the fleet. Dan Holman and Alex Knight put in their best display of the week, pushing Glen and Ed in both races, taking two seconds. Martin Jones and Ian Lodder were also having a great day, with a 5th and 6th taking them into 6th overall, enough to capture the Master Trophy and win the battle with his long-time competitor Andy Fitz. Shaw and Struckett laid down a 3rd and 4th in the last two races capping off a consistent display that was enough for 5th overall. 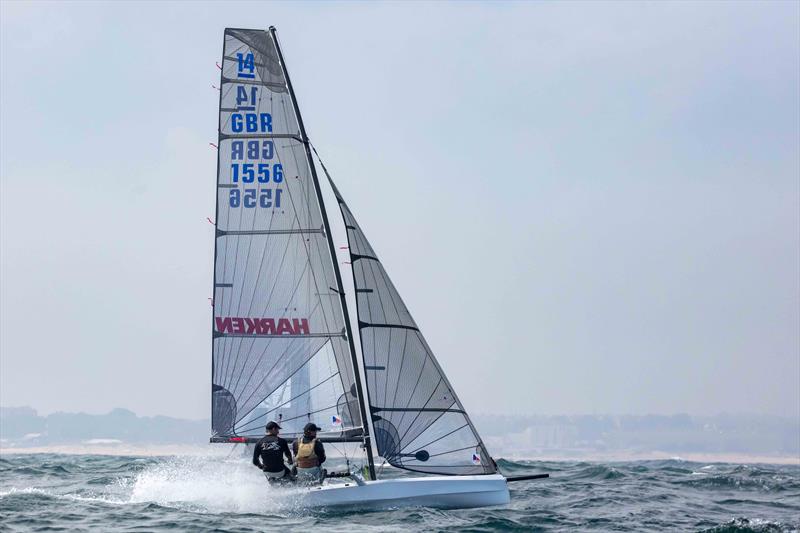 Returning to the class after a two-year sabbatical, Douglas Patterson and Mark Tait sailed a solid series to take 4th overall. Holman and Knight took third, with Massey and Hillary taking second.

The podium top step wend to Glen Truswell and Ed Fitzgerald with a perfect scoreline of six race wins. This dominant performance demonstrated great technique, tactics, boat handling, and teamwork which was even more impressive considering the close scoreline across the rest of the fleet.

Speaking on behalf of Tynemouth Sailing Club and its members we really enjoyed hosting the International 14 Nationals week and Prince of Wales Cup. As a club with a long and rich history of International 14 sailing it was fantastic to see a fleet of modern 14s enjoying the club, its surrounding bars and restaurants and some excellent and varied north sea sailing conditions. It was also great to see such strong support from the TSC membership with a great mix of former 14 sailors and current active club members from various classes supporting the event both onshore and offshore. As a club over recent years we have worked hard on improving our facilities and developing our race management skills across the membership; being able to put this into practise in the prestigious International 14 nationals has been a source of pride for all involved, and we hope to see the 14 fleet back in the future.