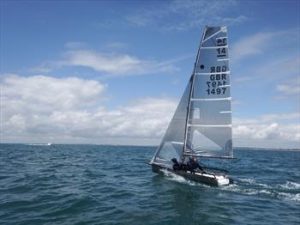 Sailor profile and interview with newcomers Jock and Emily

Recently at the RYA Dinghy Show Jock and Emily introduced themselves to some members of the I14 fleet on the stand, having just bought their first International 14. Their excitement for owning their first I14 was clear to see and they wanted to find out hints and tips from the I14 sailors there, we discussed a couple of the key areas of the I14 while on the stand and tried to point them in the right direction with boat set up etc.

Now only 6 months since purchasing their first I14 they have upgraded to a slightly newer I14 and have been out on the water getting to grips with their new boat. We thought we would introduce you to them and get an inside view of what it's like to join the International 14 class. Sailing History: Jock grew up in a family of sailors, but started sailing solo in a Sabot (only sailed in Eastern Aus) at 7, progressed to Laser 4.7 at 11 and then Bic Techno 293 at 13. Jock went to 3 ISAF Youth Worlds for Australia on the RSX, before moving into the Finn class after he turned 18. He campaigned the Finn with the Australian Sailing Team for the Tokyo Olympics, missing the qualification at the 2019 Finn Gold Cup in Melbourne. Now helming an I14!

Sailing History: Emily grew up in a family of sailors, but started racing at the age of 12 in a RS Feva. She moved to the 29er at 14 and after 2 years she was able to qualify for 2 ISAF World Championships representing GBR. Emily then transitioned into the British Sailing Team sailing a 49er FX, doing 2 years of an Olympic Campaign before stepping back to focus on University studies - but still with a high competitive spirit to race. Now crewing an I14.

What has attracted you to the International 14 class?

The I14 is the first boat that we have sailed together, and the International 14 was about the only boat we ever seriously considered. A couple of boats appeared in Tasmania and Jock was watching them with interest, as well as our good mate Cameron Tweedle started sailing with Katie Nurton and was constantly telling us how much he was loving it. Emily has seen International 14's sailing around in Chichester Harbour for most of her life, and we just decided we wanted something exciting! Once deciding that we were going to look at International 14's, the Perth Worlds were then on and we got an amazing chance to get excited about the class and getting involved! Emily's mum, Tracey Covell, also sailed the class back in the day and was able to tell us how much she'd loved sailing them.

Why the International 14 instead of other high performance skiffs?

The only other thing we really looked at was the RS800, but the 'X-factor' of the I14 had absolutely caught us. We are also on the big side for the 800. We were looking for a challenge, something to really keep us engaged and on our toes post-Olympic campaigns, and the I14 was the answer. We also wanted a class that had a strong presence in Australia, which the I14 certainly does. Also a class that we could sail for life, and be part of an amazing community with that's full of history. 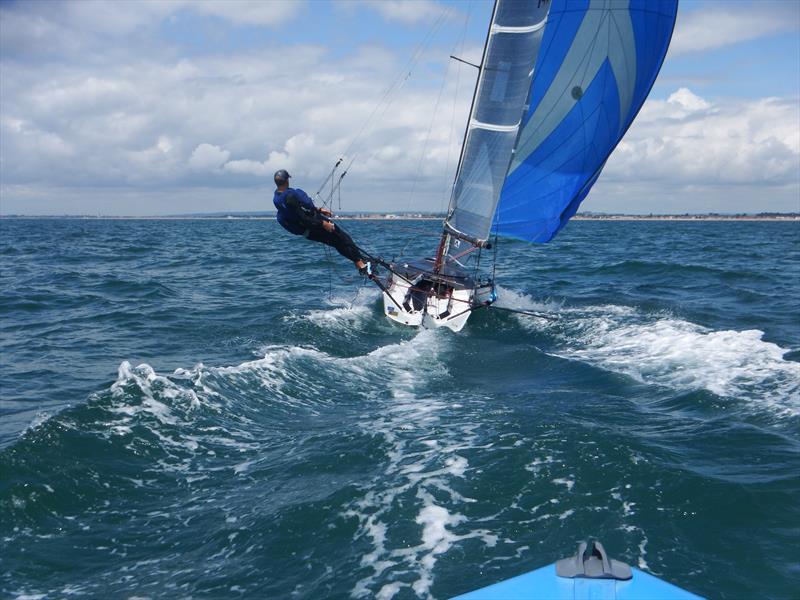 Tell us a little about your current I14.

Our boat is GBR 1497, and is an Ovington built Bieker 4. When it came up for sale, we'd actually already bought another boat, GBR 1415. We'd bought that boat before I even moved the UK, and had spent the winter fixing it up ready to race properly again. But by the time 1497 came up for sale, we'd learnt so much about the class and the boats, and we were worried we hadn't quite got the right thing. So we took a huge risk and picked up 1497 before ever even sailing an I14. So now we own 2 boats, but fortunately a friend of ours was looking for an upgrade and 1415 suited them perfectly now that it was fixed up and ready to go. So the risk paid off and we ended up with 1497 in amazing condition, with a bunch of good kit. We managed to track down the original owners, lots of the class members who'd sailed it and really did our homework this time, and we have absolutely no regrets. Having so much support from the other I14 sailors was amazing, and really made a huge difference in getting us set up with the right stuff.

How have your first few sails in the International 14 been?

We sailed for the first time the day before the lockdown started, and then had to pack it up and wait it out. But when we could finally really hit the water we had our fair share of steep learning curves! Emily was in her element crewing on a skiff, but the differences between the I14 and the 49erFX made things complicated as feelings and muscle memory from one boat didn't transfer to the other. Jock had never helmed from the trapeze. He was a mess for the first few sessions as he sorted out some of his skills to master getting across the boat, on and off the wire and swapping tillers. Now though, we've got at least a dozen sessions in, and it's all starting to come together. Communication in the boat is working itself out, and we're learning some moding as well as gear set-up. Now we're hanging out to line up with some other boats and see how we're stacking up!

What's been the most challenging part of owning and sailing an International 14?

There were a few things that were totally new to us with the I14, the biggest being the t-foil. Just figuring out how to launch which at first was mission in itself! Trimming it and seeing how it affected the pitch of the boat for the first time totally blew our minds, and we still can't believe how safe it feels going downwind with the foil trim in a super conservative setting.

And as touched on earlier, actually getting the right boat was tricky - there are a lot of options and complexities when it came to choosing the right boat, which is where the amazing support of the class has come in.

Tacking the boat would easily be the hardest part of actually sailing the boat though, and the part that's taking us the longest to progress with. It's so easy to sink the stern in the turn, and getting our timing and rate of turn correct is a bit of a headache. The opposite is true for gybing though, we're finding it quite natural and more flowing.

One unique challenge has been navigating our dynamic as a couple now sailing together - although it has its perks as we've been able to get out on the water post lockdown restrictions easing. We've been living on our own together in lockdown, so were able to go sailing as soon as the restrictions eased.

One last piece of complexity has been the confined nature of sailing in Chichester Harbour with the banks and tide. Em has grown up sailing here but with the length of the centreboard she is having to re-evaluate where we can and can't go! Although with more experience we are starting to venture out in the bay more and are loving really unleashing the boat on some longer runs. 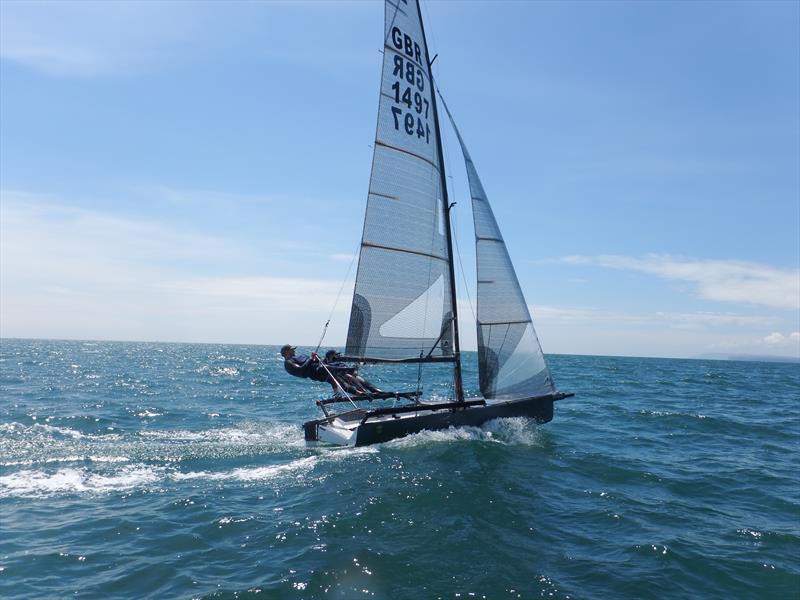 What has been your favourite aspect of the International 14?

For Jock, it's the feel on the helm. He thought that nothing in the world would ever come close to a perfectly set up Finn for helm feel, but the I14 does a damn good job getting close - along with the added bonus of going at least twice as fast.

For Emily, having come from the FX, the I14 is still a challenging boat to sail and very rewarding - it's not like stepping down into a RS200, it's still exhilarating to sail even in moderate wind strengths. The way the boat gets up and goes is super exciting!

The support and community of the class, the guidance that I14 sailors have offered us is amazing. We've been on the phone to other I14 sailors we've never met who've offered us advice on any questions we've had, we've been gifted old sails and covers, we've had help with our rig set up - honestly the class engagement and support has been beyond amazing and its very humbling to be among such an amazing group of people.

Will we see you at the racing events this year? (post Corona)

We are absolutely planning on lining up at the first chance we get. We've bought the boat to race, and we plan on making the most of that as soon as we can.

Thanks very much Jock and Emily, hopefully it won't be too much longer before the majority of the fleet will be able to join you in Chichester Harbour. It certainly sounds like you are using the advantage of sailing with members of your own household to good use on the water, getting a head start on the rest of the fleet.

If you would like to join the I14 fleet there are crewing opportunities available and if you would like to buy a boat we are here to answer any questions you may have before purchasing an I14. We will also be at the Dinghy Show next year with an I14 on display and lots of I14 sailors there to answer any questions. Please get in touch with us via Facebook @International14GBR Instagram @international.14 Website gbr.international14.org

See you on the water!